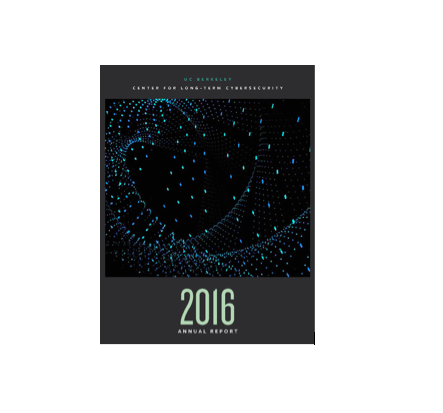 The Center for Long-Term Cybersecurity's 2016 Annual Report provides an overview of the Center’s progress and achievements from 2016, as well as our goals for the future. The report is organized around key areas of focus that shaped CLTC’s activities throughout the year, including organizational development, research and thought leadership, education, collaboration and strategic communication, and fundraising.

The UC Berkeley Center for Long-Term Cybersecurity (CLTC) has released our 2016 Annual Report, which provides an overview of the Center’s progress and achievements from last year, as well as our goals for the future.

“2016 was a year of significant growth for CLTC,” write Steve Weber, Faculty Director, and Betsy Cooper, Executive Director, in the report’s introduction. “We doubled our staff, hosted major events in the San Francisco Bay Area and Washington, D.C., funded creative research projects, and prepared to launch a master’s degree program in cybersecurity. Through it all, we sought both to educate our partners about the importance of taking a longer term view of cybersecurity, and to encourage them to stretch their impact, both within and outside the university. This annual report reviews our accomplishments and defines the impacts, obstacles, and risks that remain in the long-term endeavor that we have begun.”

The 2016 Annual Report is organized around key areas of focus that shaped CLTC’s activities throughout the year, including organizational development, research and thought leadership, education, collaboration and strategic communication, and fundraising. The report details a range of highlights from 2016, noting how CLTC:

– Built out our administrative capacity by hiring several staff members (some part-time) to work on events and general administrative support, and moved into a temporary three-room office space on the UC Berkeley campus.

– Developed an External Advisory Committee, a group of six corporate executives and government leaders who represent companies like Visa, Facebook, and Uber and have committed time and resources to helping the Center think strategically about our growth plans.

– Released the Cybersecurity Futures 2020, a major report detailing five possible scenarios for how cybersecurity and humans’ relationship to technology could evolve over the next four years. Since the report’s release, the scenarios have had significant impact on the thinking of public and private officials, both here and abroad.

– Invested more than $900,000 in research funding to support 22 projects across the UC Berkeley campus. The first class of CLTC grantees worked on such issues as how organizations can better detect spear-phishing cyberattacks; how neural signals could be used as a method of online authentication; and how at-risk activists and NGOs can better protect their digital activities from state-level surveillance. (We also issued a request for proposals that led to almost $950,000 to support 27 research projects across the UC Berkeley campus in 2017.)

– Worked with the UC Berkeley School of Information and Department of Electrical Engineering and Computer Sciences (EECS) to lay the groundwork for a new Master’s Degree of Information and Cybersecurity (MICS). Pending approval by the university, the MICS degree hopes to welcome its first cohort of students in January 2018.

– Received a grant from the MacArthur Foundation, which will fund a scoping project for a human rights-focused initiative that the Center hopes to establish in the coming years.

– Launched a reading group for graduate students across campus. The largely student-driven group has brought individuals from across disciplines to discuss current research and events in the field.

– Promoted education and dialogue through our Seminar Series, which in 2016 brought in 11 speakers from government, academia, and the private sector.

– Worked to support diversity in the cybersecurity field, in part by co-hosting a Women in Technology Conference securing funding for a one-day technical training course for women and minorities.

– Hosted a Government and Tech conference for the National Intelligence Council (NIC) to provide specific input for the Global Trends 2035 Report, which the NIC releases every four years to inform high-level government policymakers about important drivers of change in the U.S. and around the world.

– Hosted an event in Washington, D.C. together with the Bipartisan Policy Center, detailing cybersecurity policy ideas for the new administration, which included recommendations for how to bolster the cybersecurity talent pipeline and effectively support the demand for research and innovative technical solutions to policy challenges.

– Hosted a meeting of the White House Commission on Enhancing National Cybersecurity, which was established by President Obama to inform the next presidential administration on priority issues in cybersecurity. Thanks in large part to our publicity efforts, the meeting drew more than 150 attendees, who listened as 11 expert panelists testified about key challenges and opportunities for strengthening cybersecurity in the digital economy.

– Sent representatives to speak at numerous panels and conferences, including the New America Conference, Stanford WorldView, RSA, and Techonomy 2016.

– Partnered with European-based researcher Gilad Rosner on the Internet of Things Privacy Risk Mapping Project. CLTC has provided input and advice on the Project’s first workshop, to be held in early 2017.

– Hosted the only West Coast meeting of the White House Commission on Enhancing National Cybersecurity. The Commission’s report was published in December 2016.

– Traveled to Ireland, India, Russia, Singapore, and France as part of ongoing efforts to work on cybersecurity issues internationally.

– Launched Twitter and Facebook accounts, which have made our work and programs more accessible and searchable by the general public. We also refined the contents of our weekly newsletter, which has a continually growing subscription base.

– Launched a Corporate Membership Program, designed as the primary avenue for companies to engage with the Center on research and other forms of collaboration.

These highlights—and many more activities—are detailed further in the report, along with more information about our future plans. “CLTC aspires to be ‘the’ voice on long-term cybersecurity,” the report says. “In our first year, we took a diverse approach to achieving that goal. In our second year, we have begun to narrow our scope in order to focus on a more selective set of research, educational, and outreach activities. But exploration and innovation will remain an important part of our development as we go forward.”