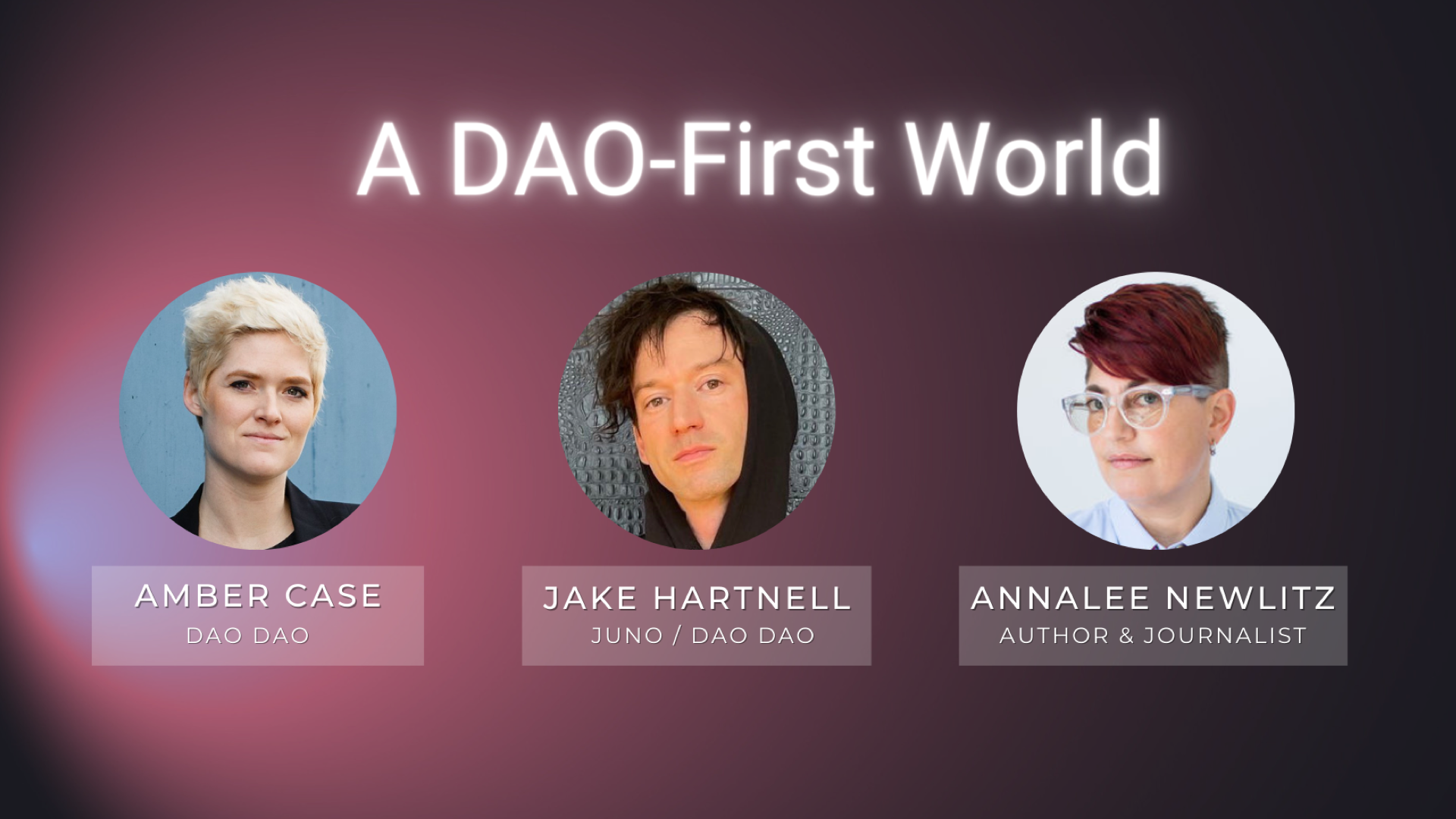 Blockchain technology has transformed the financial services industry over the past decade. The rise of cryptocurrencies and non-fungible tokens (NFTs) highlights shifts in how people, organizations, and governments spend, make, and understand the role of money in society. More recently, decentralized autonomous organizations (DAOs) promise radical new forms of collective organization and ownership. But can they deliver? Is a DAO-first economy, political structure, or world possible, or even desirable?

On October 27, 2022, the UC Berkeley Center for Long-Term Cybersecurity (CLTC) presented a conversation between technologists Jake Hartnell and Amber Case on the advantages and disadvantages of DAOs, moderated by science fiction author Annalee Newitz. Case and Hartnell are both graduates of UC Berkeley’s School of Information and co-founders of DAO DAO, a DAO designed to help build and operate other DAOs.

“DAOs are effectively democratic institutions instantiated in code, and the mechanism of that democracy uses cryptography to assure that the democratic structure works the way that it is purported to work,” said Nick Merrill, Research Fellow at CLTC and Director of the Daylight Security Lab, in an introduction to the panel. “Of course, the devil is in the details, so that’s what we’ll talk about today.” The panel was held exactly one year following a panel on tokenized governance, which featured a conversation between Merrill and Hartnell.

In his opening remarks, Hartnell explained that a DAO is “an organization where the rules are enforced by a computer program,” instead of by courts or other traditional governance mechanisms. “Decentralized” refers to the infrastructure, as DAOs are “run on blockchains or decentralized databases,” he said, while the “autonomous” part refers to how members of a DAO vote on something that then automatically happens. “If you vote to pay someone to get paid, you don’t have to send it off to HR.”

While blockchain technology underpin the infrastructure that allows DAOs to operate, at the heart of every DAO are the people who use it to vote, make decisions, and govern themselves as an organization. “Humans are still in the mix here,” Harnell said.

DAOs are a relatively new phenomenon, and many of the early instantiations have been whimsical in nature. PizzaDAO, for example, was “formed to promote pizza in all forms.” Yet other DAOs are more earnest in their intent. Hartnell pointed to the example of Maker DAO, which “runs like a decentralized finance protocol,” with token-holders able to vote and “govern all the parameters and the upgrades of that protocol,” Hartnell said. “You can see the actual voting record and who has voted. It’s great for running an organization in a very transparent kind of way.”

At a higher level, Hartnell said, the value of DAOs lies in their ability to bring democratic governance to the technologies that increasingly command our lives. “For the first time, we can actually have governance over algorithms,” he said. “We live in an age where algorithms run our lives. What does democratic control over algorithms look like? DAOs are starting to explore that fundamental question that’s really going to impact the next century of human existence.”

In her remarks, Case expressed more skepticism about the transformative potential of DAOs, noting that they are still susceptible to the fundamental challenges of human politics. “If you have more voting weight, you have more voting power, and you can also call somebody behind the scenes and sway their vote,” Case explained. “If we look at these things through the lens of just institutions, we miss a lot of ‘the iceberg, proverbially. What we see as the computer code representing votes is a small, minuscule part of actually what’s going on in the DAO, all the squishy human stuff behind the scenes.”

Case said that even the terms used to describe DAOs are not necessarily accurate. “It’s not necessarily autonomous,” Case said. “It’s not running itself. It’s not like a thermostat set to it to a certain temperature. And it barely counts as an organization. Often, I would call it a ‘disorganization.’ Organizing a bunch of people is super, super hard, we have to remember how to do that. And the computer will not solve that…. A DAO is more like an LLC with some executable code.”