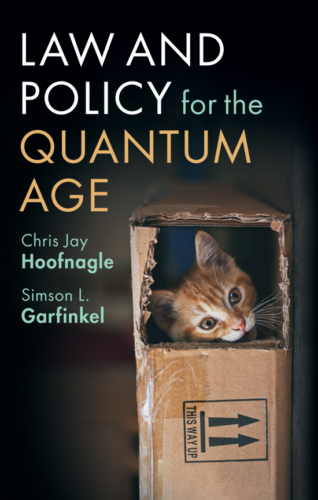 Chris Hoofnagle: Law and Policy for the Quantum Age

Chris Hoofnagle is Faculty Director of the Center for Long-Term Cybersecurity, with dual appointments in the UC Berkeley School of Information and the School of Law, where he is Professor of Law in Residence. Professor Hoofnagle will be presenting his book, Law and Policy for the Quantum Age, during an in-person and online seminar to be held on March 4 at 3:10pm Pacific. Additional information about this event can be found here.

The article below was adapted from an article authored by our partners at the UC Berkeley School of Information.

Quantum technologies are poised to change our lives.

In a new book, Law and Policy for the Quantum Age (Cambridge University Press 2022), Professor Chris Jay Hoofnagle and Simson L. Garfinkel, a Senior Data Scientist at the U.S. Department of Homeland Security, explain the genesis of quantum information theory, and its applications.

Citing the Oxford English Dictionary definition of quantum as “a discrete quantity of electromagnetic energy proportional in magnitude to the frequency of the radiation it represents,” the authors explain that they use the term “quantum technologies” to mean “tools that use those discrete quantities of energy to provide some utility.”

They focus on three primary areas: quantum sensing and metrology, computing, and communications. “Quantum computing is a family of approaches for building computers that switch information with quantum interactions, rather than with the electronic interactions that power today’s computers,” the authors explain.

In keeping with the future orientation of the CLTC, the authors developed four future scenarios to illustrate different potential implications of quantum, as they explained in an essay in Slate.

In a scenario entitled “Government Superior and Dominant,” government researchers create a working quantum computer, “but these machines are so fantastically expensive and complex that they are only available to superpower governments, enabling unprecedented capabilities for eavesdropping, surveillance, and prediction.”

In the scenario called “Private/Public Utopia,” which the authors assess as a likely outcome, governments and the private sector advance state of the science, eventually commercializing quantum sensing, computing, and communications.

The third scenario, “Public/Private, East/West Bloc,” sees quantum taking on “a Cold War patina,” as quantum technology “becomes yet another controlled technology in the battle between East and West.”

And in a fourth scenario, “Quantum Winter,” quantum computing is “just too complicated and too hard a problem to solve—at least for the next few decades,” and “quantum computing devices remain noisy and never scale to a meaningful quantum advantage.”

Quantum Sensing to the Fore

The importance of quantum sensing occupies a central thesis in The Quantum Age—a technology left in the shadows because of the spotlight on quantum computing. Indeed, the authors project that quantum cryptanalysis, the process of studying cryptographic systems to look for weaknesses or leaks of information, is largely a bogeyman (monstrous, but imaginary).

“There is no clear path for developing a sizable quantum computer in the next 10 years,” Hoofnagle said in an interview. “Most of the conversation around quantum is overly optimistic, and it misses the mark because the focus is on cryptanalysis. That would be a foolish investment, because a quantum service that can crack crypto could very easily become a crime, just like breaking into a house is a crime.”

More likely to be scalable than quantum computing in the near term, “quantum sensing is the most important version of the technology from a national security standpoint, and it’s also most likely to succeed,” Hoofnagle said. “Quantum sensing will do more to change how nations surveil each other, prepare for conflict, and develop new inventions.”

Quantum sensing technologies could be transformative, Hoofnagle explained, because they can be used to measure phenomena such as electromagnetic fields and gravity. “You could use a quantum sensor to detect landmines, because the gravity of dirt with a landmine will be different from the gravity of dirt without a landmine,” Hoofnagle said. “Someday you could have a vehicle with a gravimetric sensor, and they’ll send that out to detect what’s in people’s homes, or in the enemy’s bases. Electromagnetic is just as exciting, as you could use it to, for example, detect submarines.”

As a result, quantum sensing has strategic implications and is now a battleground in the China-U.S.-EU technology superiority race. For America to perform in this race, it has to continue to invest in big science—particularly outer space, laser, and optics—and reduce obstacles that complicate researchers’ work, embrace innovation, and optimize immigration to attract and retain the most promising scientists in the world.

Quantum simulation, too, has potential to lead to groundbreaking new technologies. Based on “a series of techniques that seek to replicate physics at the quantum level,” Hoofnagle said,” quantum simulation could lead to “better batteries, better energy storage, better solar capture, and more efficient photosynthesis. Those are the things that will make people billions of dollars — and that won’t be illegal.”

The Quantum Age also could rise to power imbalances, the authors explain, where those with quantum technologies can know more and understand more about the world than others, and these capabilities have few practical countermeasures. Hoofnagle and Garfinkel draw parallels to earlier generations of technology to show that we can anticipate the likely conflicts that will arise and build in safeguards now.

“I decided to work on this topic after some great conversations with Lily Lin (MIMS 2019) in the context of the cybersecurity reading group,” Hoofnagle said. “After I developed an article, I ran into Simson Garfinkel on a plane. We talked for 10 hours and decided to convert the article into a full-length book together.”

The duo decided to publish the book with open access “because we are both longtime government employees; our work should be available to the public,” Hoofnagle said. “We needed a book-length treatment of quantum technologies, but wanted the accessibility normally afforded to articles.”

Law and Policy for the Quantum Age can be purchased in print, or accessed in full on PDF, from the Cambridge University Press website.

Published in 2018, CLTC’s Cybersecurity Futures 2025: Insights and Findings report provides insights to help decision-makers drive operational and tactical adaptation for a rapidly changing technology security environment. This report included a scenario, “Quantum Leap,” that depicted a world in which quantum technologies fall into the hands of criminal gangs. Watch the video below.