The Center for Long-Term Cybersecurity was proud to help present Women In Tech: A Symposium On Innovation & Entrepreneurship on Thursday, November 30, 2017 at the UCSC Silicon Valley Campus, in Santa Clara, California.

Camille Crittenden, Deputy Director of CITRIS and the Banatao Institute, introduced the symposium, followed by CLTC Executive Director Betsy Cooper. Dr. Cooper welcomed the opening keynote and explained the work of CLTC, including the Center’s commitment to promoting diversity in tech and cybersecurity and creating a cyber jobs pipeline for women and minorities. As part of a social media campaign highlighted at the symposium, Dr. Cooper shared her pledge to “teach women and underrepresented groups the vocabulary of cybersecurity.” Cooper has written about women in cybersecurity several times, including Cracking the Cybersecurity Gender Code (Christian Science Monitor) and More Than Technological Know-How (New America).

Poornima Vijayashanker, founder of Femgineer and founding engineer of Mint.com, was the first keynote speaker. Vijayashanker’s talk, “Be the Token and Be Proud of It,” touched on the history of women advocating for equality in the workplace (from Abigail Adams to Gloria Steinem) and reflected on the importance of sharing one’s own experience to inspire and teach others: “There’s always someone out there who’s a little less experienced than we are,” she said. Vijayashanker also urged women (in industry, academia, and other industries) to stand against the theory of “cultural fit” that is often used as a reason to exclude or push women and minorities away from opportunities—and out of the workplace.

The panel covered the importance of mentorship and establishing your own personal board of directors. Velastegui said that when it comes to her career, she views herself as a corporation, rather than an individual: “The reason I’ve been so successful in changing industries is because I’ve had this personal Board of Directors to show me how my engineering lens interacts with other facets of business,” she said. “They also encourage me to pursue leadership roles beyond of engineering, despite imposter syndrome.”

Teclemariam echoed Vijayashanker’s sentiment about being the token woman/minority, noting “you do learn to develop thick skin.” She shared that she too experiences imposter syndrome and feels burdened by the weight of constantly representing the African American/female demographic in her industry. She commented on the importance of developing a plan of succession: “Nothing’s going to change if we keep being replaced one by one,” she said. “This is how we get more than one woman at the table.”

Following the panel, Kara Sammet, Inclusion & Leadership Strategist at Gender Lenz, facilitated a conversation regarding workplace climate challenges. Each table of symposium attendees completed a group exercise that led to a dynamic conversion about personal experiences and systemic challenges.

The second panel discussion, “Overcoming Challenges,” explored the current state of research and offered innovative strategies for creating inclusive environments, promoting accountability, and reducing discrimination in the workplace. The panel included Jessica Ladd, Founder and CEO of Callisto; Michelle Leahy, Senior Manager, Analytic Programs at AnitaB.org; Nathalie Mathé, VR Creative Director and Founder at NativeVR; Heather Metcalf, Director of Research & Analysis at Association for Women in Science; and Rebecca Stuart, attorney at the employment law practice Wilson Sonsini Goodrich Rosati. The panel, which was moderated by Kara Sammet, did not shy away from candidly discussing the topic of sexual harassment currently dominating the news cycle.  Stuart noted that “the sexual harassment issues are not worse now than [they were] 6 years ago or 16 years ago. It’s just being talked about now.” She urged the audience to keep that conversation going and not let the momentum fade away as people and the press become fatigued of the topic.
The day’s final keynote, “Women Do Ask: Debunking Gender Myths That Maintain Inequality,” was a dynamic presentation by Laura Kray, Professor at the UC Berkeley Haas School of Business. Kray was introduced by Tsu-Jae King Liu, Vice Provost for Academic and Space Planning at UC Berkeley. Kray explained that the stereotype that “women don’t negotiate” does not explain the pay gap. In fact, women negotiate about as frequently as men, but are still paid less on average. “Gender inequality is held together by ideologies, or belief systems, that assure us that the world is just and that the status quo is the best that we can achieve,” Kray said. “In conclusion, let’s be vigilant against the gender myths that legitimize inequality.” 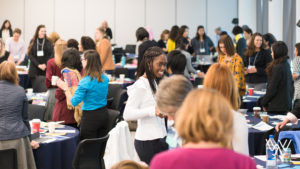 The day ended with the WITI@UC Athena Award presentations, followed by closing remarks and refreshments and networking. The awards recognized the accomplishments of technology leaders and organizations fostering interest in computer science for the next generation of women and girls. The Academic Leadership Award went to Fei-Fei Li, associate professor of computer science at Stanford University and chief scientist at Google, Inc.; the Early Career Award went to Jessica Ladd, founder and CEO of Callisto, a software platform for survivors of sexual assault; and the Next Generation Engagement Award went to Claire Shorall, computer science educator and advocate, and principal of Neo.

The symposium was presented by the Women in Technology Initiative at the University of California, CITRIS and the Banatao Institute, UC Berkeley College of Engineering, and the Center for Long-Term Cybersecurity; it was sponsored by a variety of organizations, including Facebook, CITRIS Foundry, The Coleman Fung Institute for Engineering Leadership, UC Berkeley School of Information, Berkeley Center for New Media (BCNM), Haas Women in Leadership, Startup@BerkeleyLaw, SkyDeck, UC Berkeley Extension, The International Society of Service Innovation Professionals (ISSIP) and the UC Berkeley Bakar Fellows Program. CLTC Special Assistant Kristin Lin was a member of the program committee, and Betsy Cooper was a member of the WITI@UC Athena Award committee.

All photos, except photo of Betsy Cooper, by Adriel Olmos, CITRIS at UC Berkeley