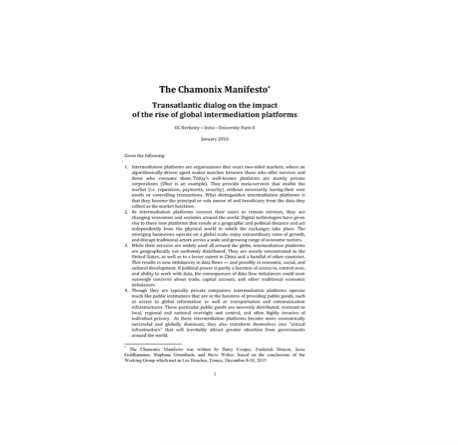 The term “intermediation platform” describes digital services like Uber and AirBnB that directly connect consumers and service providers. Because these services operate across geographic boundaries, often beyond the reach of regulators, they have sparked controversy—particularly in Europe—as a threat to the “digital sovereignty” of governments.

Seeking to address this debate, a team of representatives from the Center for Long-Term Cybersecurity (CLTC)—including Steven Weber, Faculty Director, Jesse Goldhammer, Associate Dean of the School of Information, and Betsy Cooper, Executive Director—are collaborating with U.S. and European colleagues as part of the Digital Sovereignty Working Group. This group, comprising representatives from industry, academia, and the media, aims to address central questions related to intermediation platforms: what is really at stake in these debates? How will the disagreements affect the evolution of trans-Atlantic digital and data economies? And what are the implications for cybersecurity problem solving?

“Some of the largest American internet businesses are locked in an ongoing battle with European governments and the EU around some of their most successful products,” explains Weber. “We’re trying to grapple with the deeper issues that lie behind these fights, which present symptomatically as arguments about competition policy and regulation. Behind those symptoms, it’s not just that Europeans are concerned about American competitive success or nostalgic for a pre-Internet world. And it’s not just a repeat of the anti-multinational company rhetoric of the 1960s and 70s. These fights are really about power, sovereignty, and economic growth—abstract terms all, but with very concrete consequences for how people absorb technology and the large companies that provide that technology into their lives.”

The Digital Sovereignty Working Group first met last December in Chamonix, France, to scope key challenges and issues related to intermediation platforms. As part of their agenda, the group’s members used CLTC’s scenarios as a foundation to think through a possible future in which intermediation platforms extend to core services like education, accounting, and plumbing, and in which national governments adopt diverging approaches to these platforms.

As a result of this initial work, the group drafted “The Chamonix Manifesto: Transatlantic dialog on the impact of the rise of global intermediation platforms,” a document written by the CLTC team, along with Frédérick Douzet, Chair of Cyberstrategy at Paris 8, and Stéphane Grumbach, Senior Scientist at INRIA. “Our Chamonix work is an ongoing effort to clarify what is really at stake for both sides and seek common ground—or at least mutual understanding of differences,” Weber explains.

As the Manifesto outlines, the Chamonix Group’s objectives are “non-partisan, focused on understanding the mismatches between the different perspectives, public vs. private, Europe vs. US, as well as the potential for the society of the complex mechanisms at play that involve creative destruction, as well as the emergence of new economic models and new ways of exercising political power.”

The Manifesto calls for a “common vocabulary” and increased collaboration among “relevant institutions to address growing disputes.” It also outlines a plan for the Digital Sovereignty Working Group to continue research, writing, and meetings focused on five key goals: 1) Creating metrics that measure in a meaningful way the imbalances that are being created by intermediation platforms; 2) Describing representations in discourse and debate that illustrate what is at stake for each side; 3) Exploring historical analogies that can shed light on the broad consequences of these developments; 4) Designing solutions that could fill the ‘institutional gap’…to create shared understandings; and 5) Engaging in specific problem solving that bears on issues caught up in this debate, such as resilience, surveillance, cybersecurity, terrorism, etc.

“As these intermediation platforms become more economically successful and globally dominant, they also transform themselves into ‘critical infrastructure’ that will inevitably attract greater attention from governments around the world,” the Manifesto says. “The diverging visions, which range from purely economic and commercial to mostly cultural and political, are not well understood on the respective sides of the Atlantic. That misunderstanding is creating significant tensions and corrosive frictions that are not just economic but deeply political and social in character…. Actions need to be taken now to increase mutual understanding on these issues.”

You can download the Chamonix Manifesto here. Stay tuned to the CLTC website for future updates on the work of the Digital Sovereignty Working Group.