“In more ways than one, this has been a foundational year for the Center for Long-Term Cybersecurity.”

So begins CLTC’s 2015 Annual Report, which chronicles the wide array of activities undertaken during the center’s first year. Download the PDF of the report here. 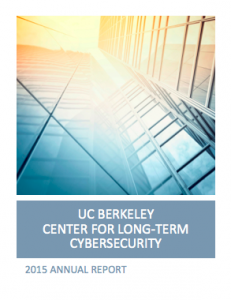 “This annual report reviews our accomplishments and defines the impacts, obstacles, and risks that remain in the long-term endeavor that we have begun,” wrote Steve Weber, Faculty Director, and Betsy Cooper, Executive Director, in the report’s introduction. “Our goal remains to achieve a UC Berkeley ‘School of Thought’ around long-term cybersecurity; in other words, to make the Berkeley perspective indispensable to public and scholarly thinking around the subject, and to make sure those two discussions interconnect in meaningful and helpful ways that improve the quality of both.”

Among many other activities, the report details how CLTC:

* Conceived, developed, and distributed five scenarios for the future of cybersecurity.

* Allocated just under $900,000 in research grants to 19 projects across five departments.

* Engaged in a number of C-level meetings with principals from top Silicon Valley firms and developed partnerships, in the United States and internationally, with institutions like the Center for a New American Security (CNAS), CyberSecurity Oxford, and the Berkeley Center for Law, Business, and the Economy (BCLBE).

* Developed logo and branding materials, and launched the CLTC website and e-mail newsletter.

Thank you to everyone who supported CLTC throughout 2015 (and beyond). We couldn’t have done it without you!

Chris Hoofnagle: Law and Policy for the Quantum Age